First time I made them just as the recipe stated. They were pretty tasty straight out of the oven, but after they cooled they were thick, bread-y, and chewy. My kiddos wouldn't even finish them. (and they are NOT the type to turn their nose up at Banana chocolate chip muffins). Take two I tweaked. Instant oats instead of rolled, a little vanilla and salt, and a good healthy glop of sour cream. And a tiny bit (about half Tbs) of softened butter. Now THAT was yummy. Yes, I know, I'm defeating the purpose of "healthy" - but one thing I have learned in my motherhood. It doesn't matter how healthy something is if none of your kids will eat it! 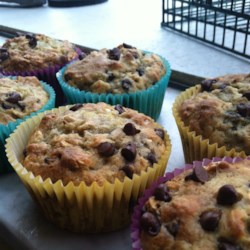