Why 3 stars? No where does it say you should reserve the sauce from the pan and pour over each slice of the roast. It looked beautiful out of the oven but was virtually tasteless. When I saved the leftovers (there were a lot of them, unfortunately) in the fridge, I poured the pan sauce over the roast to keep it moist. Next day I sliced off a piece and put some of the sauce on it. Incredible. My wife sent a note out to the poor people who had eaten the bland product from the night before explaining our mistake. Maybe I should have assumed the sauce in the pan was good as a gravy but I thought it might have been too greasy. Probably would have been a five star if I'd gotten it right the first time. Also, as others have mentioned, it cooks faster than the recipe indicates. 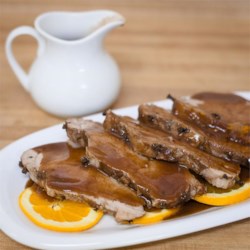