First, I must say that I don't think make-ahead gravy ever tastes as good as making it from the pan drippings, but it's a tremendous time saver for that time-consuming Thanksgiving meal. Maybe my turkey wings weren't "large" enough, I don't know, but the broth did not have a lot of flavor even though I used a box (quart) of turkey stock as part of the 10 cups of liquid. Something I rarely do when making a recipe is modify it too much first time, but I found it necessary here. I added some Better Than Bouillon Turkey Base, some poultry seasoning, finely chopped wing meat, and some of the roasted veggies which I'd pureed in the blender. It all came together well, and I ended up with a flavorful gravy. I made another recipe last year from this site, but with these modifications, I think this is a better recipe. I have to wonder if 2 turkey wings is enough to flavor 10 cups of water, and in the future, I will use more wings and some necks if I can get them. Don't like changing a recipe this much, but after tasting the gravy, it was necessary. All was good in the end, and this 4-star rating is based on the tweaks I made. 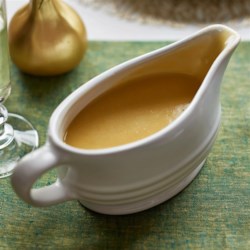