This is my recipe, and a couple options had been left out when it was kitchen approved. I use red wine instead of the vinegar, and I usually use garbanzo bean flour for thickening instead of corn starch. The garbanzo bean flour adds protein and other nutrients to the gravy, and the corn starch is generally made from GMO corn which I avoid. I also sometimes use chopped frozen tomatoes from our garden instead of canned tomatoes. Tomatoes that we don't use soon enough are cored and frozen for use in pot roast and tomato soup. I always use more than 1 garlic clove because we like garlic - usually at least 3-4. I also add more than a pinch of the seasonings. The recipe is great as listed, but I thought I would add a few more options. It freezes well for future meals, and tastes as good as when it was freshly made. I have also made this recipe in a pressure cooker that cuts down on the cooking time. The only difference is that the meat is pressure cooked for about 45 minutes, do a quick release of the pressure, add the veggies, pressure cook for an additional 15 minutes, and quick release the pressure. Remove the roast and veggies and cover with aluminum foil to keep warm. Strain the remaining liquid into a fat separator, wait for the fats to raise to the top, and put the liquids and strained onions back into the pressure cooker to make the gravy. Mix 1/4 cup water and a couple tablespoons of corn starch and add to the liquids for thickening. By using a pressure cooker, the roa 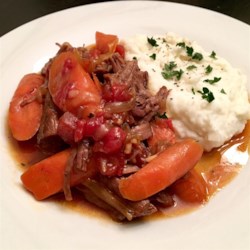