I've had Spanish meatballs before and really liked them so I was anxious to try these. I considered a prior reviewer's comment that they were a bit salty so I decided to leave out the added salt entirely. Rather than frying the meatballs in batches, I simply baked them at 400 degrees for 20 minutes. Finally, I just dropped the meatballs into the sauce and simmered everything together for 45 minutes. This was excellent. I would suggest cutting the amount of pancetta in half, however, because it was still a little salty; the only thing that marred an otherwise tasty treat. We served this with Awesome Rice Pilaf and Swiss Chard Sauteed with Lime, both recipes from this site as well. The combination of the three made for a memorable meal. 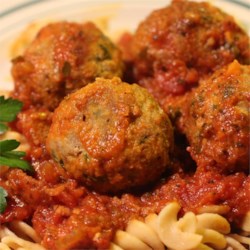