Tried this tonight, the flavour was awesome. I had 2 smaller tenderloin pieces that were 3lbs together, but they were partially frozen still, so time to cook was longer than recipe stated (but understandable). The flavour was fabulous! I didn't have maple bacon, but the apple butter and honey were very thick, so I added some pure maple syrup to the glaze which gave a nice hit of maple flavour. Will definitely do this one again! 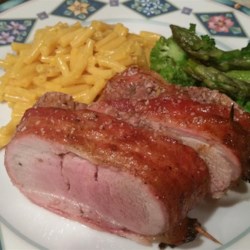