Wow! I would not change anything. The proportions are great already. The only thing I changed, because I didn't have any, was that I used a few shakes of Franks Hot Sauce instead of the cayenne pepper. I cut up everything and put it in a gallon ziploc bag the night before. The next morning, we just dumped it into the crock pot, turned it on low and let it cook all day long. Do NOT add any water - the steam from the crock pot makes plenty of liquid. Everyone is on their second bowl tonight, with a request to never make regular chili again! Ha! I would have never thought that sweet potatoes would be good in a chili, but they are really tasty! One thing I would suggest - after dicing your sweet potatoes, you might want to nuke them a little bit first. Ours were not 100% soft, even after cooking all day long. But, that could be a variance in taters too. Thank you for sharing your great recipe - it will become a standard at our house now too! ? 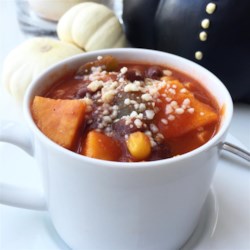