Followed the recipe with the exception of adding 1/2 cup raisins and 1/2 cup zante currants instead of 1cup raisins. I initially thought the amount of water (10cupes?) seemed a bit much, esp if you include the applesauce, but since I'd never cooked with steel cut oats, I figured it'll "drink" all the water up and be more like an oatmeal when done, I was wrong. After letting it cook for 6 hours (still looked like brown water in a crockpot) I cooked it for another 2 on low.. still watery and I tasted it this morning (let it cook over night) it was a soupy-watery mess with probably about 3 cups of liquid still left over. I had to dredge out the "oatmeal" from the bottom of the crockpot. All that water didn't get absorbed, or cook down.. its watery oatmeal. Smells great, but its not appealing at all. Was kinda hoping this would be the chance I'd get over my distaste for oatmeal with something yummy. I'll keep searching. 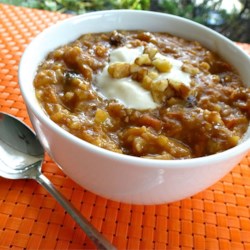