This is really quite good. It's more of an omelet/fritatta hybrid than a true omelet, though, because the ingredients are incorporated in to the egg mixture. I had an 8 oz container of sliced mushrooms and a bag of wilting baby spinach that needed to be used. I also had all of the other ingredients on hand, so decided to try this for dinner. The thing is, I don't use egg substitute, so I just used real eggs. 4 large eggs can be used for the 8 oz of egg substitute listed in the recipe. Because I had so many mushrooms, though, I just doubled the recipe and cooked this is in an extra large skillet - that means for a standard 8 oz container of mushrooms you'll want to use 6-8 eggs. I used 6 because that's all I had left. Everything else was doubled, as written. It turned out quite nice. The pepper flakes gave it a nice little kick without being too spicy. Be sure you chop up the onions, mushrooms and spinach in to small, even pieces. Don't toss them in whole. This is a good, simple and FAST dish for any meal. I ate my portion with a little sour cream and additional shredded cheese. This would really work well if you've got little bits of other vegetables or even proteins like leftover chicken that need to be used up. If you're having trouble getting the top to finish cooking without burning the bottom, consider placing it in a pre-heated oven 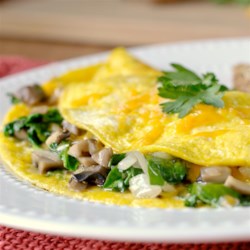