Amazing! I collected recipes during the year to make for Christmas 2001. I had an open house for several days and needed prepare-ahead recipes that I could pop in the oven or in the fryer as my guests arrived. My first batch of dates I tried as the recipe called for, in the oven. Cooking by this method made the bacon unevenly cooked. My husbad tried one and didn't care for the sweetness of the date. I almost chucked the whole heap of bacon wrapped dates and called it "a lesson learned". The next day I had the wok with hot oil cooking crab puffs and I decided to try deep frying a batch of the dates. It made a HUGE difference in the flavor and texture of the dates! My husband thought they were delicious now! They were no longer super sweet and the bacon was cooked evenly. I asked my closest friends to rate the appetizers from most favorite to least (I had at least a dozen to choose from) and these were number one with most of my fussy eaters. They're one of the best for making ahead and keeping in the fridge until ready to cook. I used a can of Diamond-A toasted and salted almonds. Because the almonds were so small, I was able to stuff two into each date. I will keep this recipe and make again. They're wonderful. 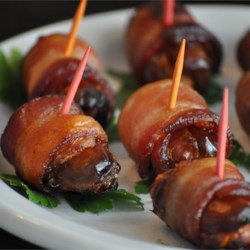