I made this for New Years Eve last night. I got away with using only 5 Tbsp. of butter when browning the bread with the garlic. I grated the Monterey Jack because I felt it would melt easier when baking. I used just one can of artichokes which I thought was plenty. Make sure you cut up the artichokes before adding them into the cheese mixture. I mixed the cheddar cheese and green onions directly into the mixture instead of sprinkling on top and added a bit of seasoning salt. I mixed the bread in last and then stored the bread mixture in a bowl in my fridge. When I was ready to bake it later that night I let the cheese/bread mixture sit out to soften a bit before I spread it into the hollowed out bread. Definitely cook it at 350 for about 30 minutes for a great result. After cooling for a couple of minutes, I sliced it into chunks for appetizers. It's very rich but very tasty. Just one note about a previous reviewer saying something about this being "bad artichoke dip". I've made artichoke dip tons of times and this obviously intended to be a different type of recipe. 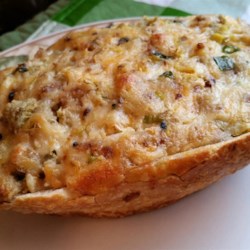