5 stars after several changes. Melted 1/4 cup butter in bottom of the pan 1st. Added 1/3 cup bisquick to the egg/milk mixture. Used homemade white bread (no crust) and mixed it into the egg mixture. Then poured the mixture over the melted butter. Baked at 400 for 20-25 minutes. Served it topped w/ syrup and homemade sweetened whipped cream. One last thing, I dont appreciate the person who (just a few comments down) blasted people for commenting on ways in which they had to or wanted to change the recipe. FYI: some people dont always have all the exact ingredients on hand and have to improvise or sometimes they just change things because they feel like it; Nothing wrong with that! By stating these improvisations, they are helping other people who don't have all the exact ingredients on hand or helping the people who don't always want to follow recipes to the T. Once again, nothing wrong w/ that! 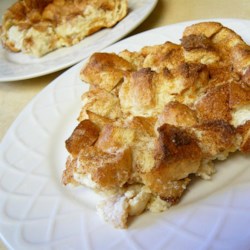