A good and easy chowder. I used at least double the celery. I also substituted a pound of canned ham for the bacon. I didn't have any bacon. I used only a pinch of black pepper and red pepper. I wanted something smooth and mild. This was a good choice for dinner after a long day. I put the vegetables in the crock pot the night before. The kids added the broth and corn when they got home from school. I added the milk, ham and seafood when I got home. It took all of two seconds, so I had an hour to rest after work instead of cooking. I look forward to making this again. 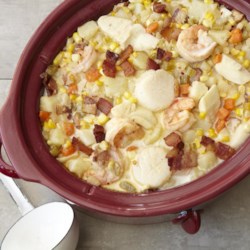