I used regular tomatoes instead of romas, and Swiss cheese instead of fontina (because those were what I had on hand). It was good, but I made a couple of mistakes that hurt it. For one, I made my own bread cubes and cut them too large. I made them about an inch square. If I make this again, I'll make the bread cubes about half that size. The other mistake is that I waited too late to add the bread. The bread needs to be added close to serving, yes, but far enough ahead that the bread has a chance to start soaking up the deliciousness. Once more, if I make it again, I'll add the bread cubes between 30 minutes and an hour ahead of serving. All that said, we really enjoyed the salad, and I'd make it again. 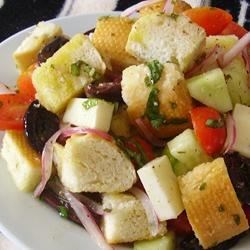