I halved this recipe and it was ample for a family of 4. Tastes great, but there was a watery milk mixture at the bottom of the casserole dish when I spooned it out to serve. I only used a handful of pepperoni that I purchased from the deli section at my grocery store (about .50 worth of pre-sliced pepperoni, and I only used 1/2 of that. It was fairly spicy.) I also didn't have hamburger, so I used meatballs that I had in the freezer - just threw some in a pan, sauted with some onion till I could chop up the meatballs and used in place of burger. Overall, a decent recipe that I would try again, but would definitely use less milk. 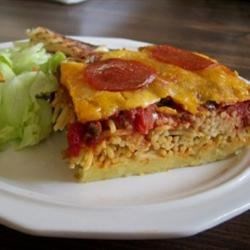