4-11-2016 ~This is neither a difficult nor an unusual recipe for dilled cucumbers in sour cream, but some things about this one stood out for me. First, some, but not all, recipes like this instruct you to salt the cucumbers first and I believe it is an extra step worth taking to release much of the excess liquid in the cucumbers. The green onions add freshness, additional flavor and color. Not sure exactly what the teensy amount of oil contributes, but I’ll tell you what – I’d leave it in there just because this was so delicious. Other than using fresh dill rather than dried, I prepared this just as directed. The only issue I have with the recipe is that I must have had an extraordinarily small English cucumber as I had probably twice as much of the creamy dressing as I needed. 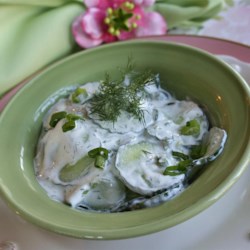