Followed the recipe pretty much.When doing the roux with flour & blending in the milk,it just wasn't thick enough. So I added some corn starch to thicken it up more when cooking.After adding the Roux to the Pot, I tried the soup,It was good,but I wanted to kick it up a notch.I added Sour Cream.What a Nice added flavor.I first added some to my test bowl of soup.It was so good.Then I added the Sour Cream to the whole Pot.Add a bit at a time to your liking,or not at all.It's great both ways. 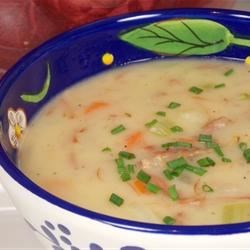