When I asked my boyfriend what types of things he likes to eat are, after much prodding, the only thing he named was Stuffed Peppers, noting that his mother makes them often. Later, he said "why don't we just go eat them at my moms?" Clearly - mom had some good stuffed peppers. Last night I took a stab at making Stuffed Peppers for the first time ever, for my boyfriend, and used this recipe. I halved the recipe, and halved 2 large peppers and filled them that way, to make for easier leftover servings. As I prepared them, my boyfriend stood over me, smirking... and said "your way is a little different." I could see he was skeptical!! Presentation wise, these peppers looked the part. Beautiful. We sat and ate, and for the first few minutes, didn't speak. I was getting nervous... I don't think he likes them. Half way through my plate, he quietly says "These aren't like my moms." I said "sorry babe..." and before I could finish he exclaimed "THEY"RE BETTER!!!! THEY ARE SO FREAKIN GOOD!" And they were!! As I sit here writing my first review, I'm eating the leftovers. YUM!! The only thing, and this may be because I eyeballed halving the recipe, is I wish I made more sauce. It was delicious and we poured some on extra rice on the side, but there wasn't a lot left for the leftovers. It was so delicious I'd want extra sauce to pour ridiculous amounts of! YUM!! May be different if you do the full recipe, or maybe worth doubling the sauce, or 1 and a half. 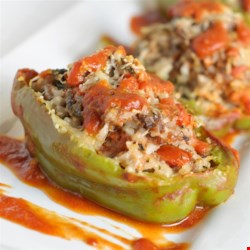