This ad will not print with your recipe
Print Options
Font Size
Include:
Save Pin
Japanese Tamago Egg
Rating: 4.59 stars
Tamago egg is classic Japanese folded omelet sometimes called tamagoyaki. The omelet is sweet, has a light texture, and works well when served over sushi rice and with soy and wasabi sauce for dipping. Tamago is the Japanese word for egg. Mirin is sweet rice wine and dashi is traditional Japanese soup stock (make from kelp or shiitake). These ingredients are now carried in most larger grocery stores or at Asian markets.
prep:
15 mins
cook:
10 mins
total:
25 mins
Servings:
6
Yield:
6 servings 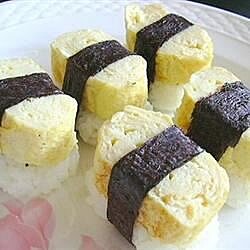 It is best to use a Tamago pan, which is a 5x7-inch square nonstick frying pan, but any small pan will work--you just won't have square ends on your finished omelet-- but no effect on taste.

Japanese Tamago Egg
this link is to an external site that may or may not meet accessibility guidelines.