I think those who gave negative reviews should try it again. This came out exactly as I was hoping. I did tweak a couple of things, but nothing that would have made enough of a difference to believe it could have been as bad as some users experienced. I doubled the cinnamon and added about 1/4 teaspoon of ground nutmeg. The apples I used were large, so maybe those who thought there were not enough apples should go ahead and add more. Also, the recipe does not specify light or dark brown sugar, so I used dark, as I thought that would go best in a Fall dessert. Beyond that, I think it's important to follow the mixing directions exactly. It's always important to make sure the flour, baking soda, and spices are distributed well, so sift them together or use a wire whisk to incorporate them. Mix the white sugar with the sliced apples (I actually diced the apples, to make certain there would be apple in every bite.) Finally, when adding the flour mixture, mix it in only until it's fully incorporated. Do not overmix, as this can lead to a tough cake. In my oven this cake took about an hour to bake, not the 45 minutes specified. I'm about to make the cake again tomorrow, it was that good! Oh, one more thought--use liquid measuring cups to measure liquids, and dry measuring cups to measure dry. And remember that when measuring flour you should lightly spoon the flour into the cup, and level off with the flat side of a knife. Don't measure flour by dipping the cup into the flour! 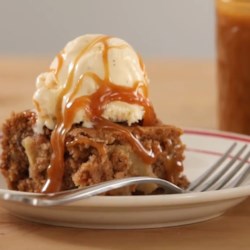