I really had high expectations for this. I used to have sauerbraten at a German restaurant in the Amana Colonies in Iowa every couple of years and for days or even weeks afterwards I would think of that meal and think to myself "Man, I really need to learn how to make that". I love sauerkraut on Reubens or brats and I always buy the good stuff that's refrigerated and not the canned junk. Somewhat unusually for me I followed the measurements to a T with the exception of juniper berries which I could not find at the store plus I added a couple of extra gingersnap cookies because they looked small to me (about the size of a half dollar). I marinated the meat for 2 & 1/2 days. I also cooked this in a Dutch oven where I browned the meat on all 4 sides first before adding the liquid and brought it just to a boil and then put it in a 250 degree oven for just under 4 hours. The meat came out almost fall apart tender. The taste of the meat was fine. As long as you got a little from the outside of the roast it had a nice little kick of sour to it's taste. My problem was with the gravy. It was way too sour and I usually like big, bold tastes. I used exactly 1 cup of cider vinegar. I ground the cookies up in a food processor and they thickened the gravy up a little too much so I was getting as much sugar from the cookies as possible. It was still way too sour in addition to being too thick so I added about a cup of water and that toned it down a tiny bit but it was still too strong. 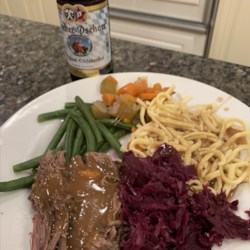