Skip to main content New<> this month
Cream of No Cream Ham and Potato Soup
Reviews:

First of all, I wanted to note that this makes more like 12+ servings or more, not 6 as listed. I used small sweet potatoes and large celery stalks/onion. I had to pan fry the veggies in 2 batches because it was just too thick in the pot to have cooked properly in one batch. I used the biggest pot I have in the house and still could only get 6 cups of liquid in the pot. Anyway, I changed this recipe a lot to suit what I had on hand, so take my rating with a grain of salt. I had just made Greek Burgers (from this site), and I cooked the veggies in the grease from that. The burgers have shallot and fennel and oregano in them, and you could taste it in the veggies once they were cooked. I used sweet potatoes instead of regular, omitted beans and corn, used veggie bouillon cubes instead of chicken broth, added 3 smallish fennel stalks and 2 smallish bay leaves to the broth. The ham was leftovers and had a sweet orange glaze on it. I was worried the sweet would clash with the savory flavors, but it all blended nicely and tasted great. I accidentally put the 1 C ham in with the hame bone, so I didn't bend it up. This recipe is a great base to modify as needed for leftovers. 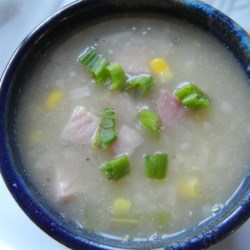 Cream of No Cream Ham and Potato Soup