I had to weigh the coconut as I didn’t have a 7oz package. If my scale was correct, it calls for 2.5 c of coconut. I used unsweetened coconut, and maybe the longer thread and sweetened coconut would add some moisture. I had to use a gluten free flour as I was making them for a friend who hadn’t have gluten...used Cassava flour which is supposed to be very close to wheat flour. I used a cookie scoop to form them and had to pack the batter into it and carefully transfer it to the sheet. (Like others, I used parchment which worked well) after fighting to get the first three cookies onto the sheet in one piece, I added another egg white which helped somewhat but still had to be very careful. The baked cookie was very dry and not chewy. I don’t like giving a bad rating to a recipe as I know little changes can make a difference, but I am disappointed with this recipe. 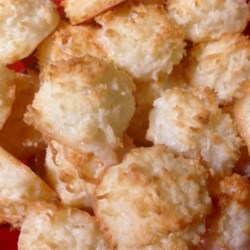