Just made it after a 7-mile run. HEAVEN. The only thing is it is a bit salty but that's because of the Goya packets an enterprising individual could make their own seasoning nixing a lot of the added salt. But as it stands, this dish is delish. Also I skipped the raisins. As Wikipedia says, raisins are sometimes in the Cuban version ;-) 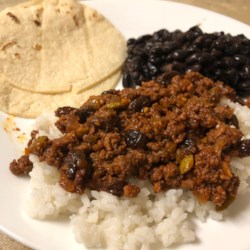