This ad will not print with your recipe
Print Options
Font Size
Include:
Save Pin
Chicken and Pumpkin Goulash
Rating: 4.49 stars
I needed to use up some chicken, and we had been given a lot of pumpkins...so I began to look for a recipe which would take advantage of my ingredients. However, everything I found was quite spicy and knew would not go over well with my grandchildren. I then came across a recipe which seemed to have promise, and used it as the basis for creating this...a new family favorite! I hope you enjoy as much as my family did.
prep:
30 mins
cook:
4 hrs 25 mins
total:
4 hrs 55 mins
Servings:
6
Yield:
6 servings 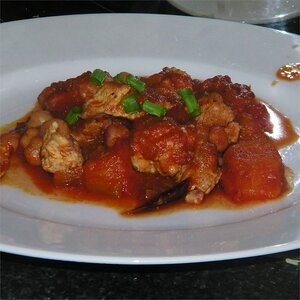 I recommend using a 5-6 quart slow cooker. If your cooker has a plastic lid, it may not create sufficient moisture and you may need to add additional liquid. If so, I suggest chicken stock. Avoid opening the cooker, as this releases the moisture build-up needed for the additional liquid in this recipe. This will also make a good vegetarian dish -- just omit the chicken!

Chicken and Pumpkin Goulash
this link is to an external site that may or may not meet accessibility guidelines.