This recipe was a great inspriation for what i ended up making for dinner. I made the stuffing mixture leaving out the wine because i didnt want it to be too watery, I and for the cheese i just shredded up some motz. and peper jack, it looked really mushy (im sure if i added more stuffing too it it would have been fine) but instead i thought it would be really good as a "stuffing" so i cut the breasts in half then sliced out pockets taking up as much chicken as possible and stuffed them as full as i could!! then i used the left over stuffing (which was about a box half of it not cooked) i crushed the uncooked portion and added it and breadcrumbs to the cooked stuffing making a really nice coating on the chicken i used 1 egg and it. dressing to hold it on. This whole process made quite a mess (as im a little messy while cooking). I baked on 350 for about 40 mins on a baking sheet and reheated some rice and made chicken gravy to put over it and it was FREAKING AMAZING the family and friends i had over all loved it i had no leftovers!! And i was worried i made too much will def make again!! 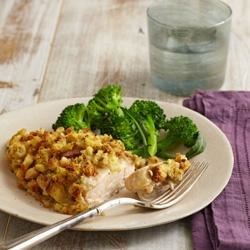