I used ground sirloin, and I sprayed the pan with cooking spray to cut the olive oil down. I left the salt out b/c I thought the 28 oz can of tomatoes I used would be salty enough, this was a mistake, it was a little too bland since the tomatoes aren't in the peppers. Next time I will not use more salt, but I will add a can of tomatoes into the orzo mixture and stuff into 6 peppers (I had leftover stuffing with 4 large peppers, so adding the can of tomatoes should be the right amount for 6 next time.) 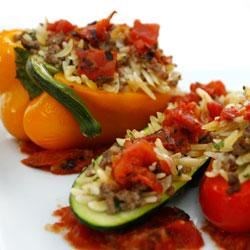