Great recipe and the meat was so tender that it practically melts in your mouth! The first time I cooked it according to directions, the meat was too salty. So I made it again and made the following changes and it was a hit (and better too): 1. I only marinated the meat with black pepper. The dry seasonings have enough sodium already. 2. I couldn't find ranch dressing mix, so I used ranch dip mix instead. 3. I mixed the dry ingredients with hot water so that they'll melt faster and added some minced garlic too. Then let it sit for about 10 minutes before putting it into the slow cooker. Next time I'm going to put some jalapenos in there to make it spicy. ***Follow-up on my original review: I made couple of other changes and the dish turned out even better - 1. Mixed the dried ingredients with 1 cup of water. 2. Added crushed red peppers onto the dry ingredients according to how spicy I want it to be. 3. Marinated the meat with crushed peppercorns. 4. I scooped some of the sauce from the side with a ladle and poured it all over the top of the meat 2 & 1/2 hours before it was done, so that the top of the meat would not get too dry. 5. I served it with rice the first couple of times, but served it with spaghetti because this time (I only cooked them according to the package's directions, no salt added into the pasta water), poured some sauce over the noodles and then the meat on top. The sauce complemented the noodles really well. 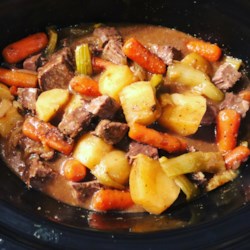