Well folks, I did some testing. My sister wants to serve these on the appetizer table at her wedding, so I did a trial run. First time I did three batches, using three different oils, and then baked half of each batch and let the other half unbaked. For each batch I used 16 oz pretzels, 1/2 cup oil, 1 package Ranch (I had the bulk stuff, so I used 3 T which is almost 1 oz), 1 T garlic, 1 T dill weed. I tried them with EVOO, veggie oil, and melted butter. Results? As far as the oils, I personally liked the EVOO best, but it isn't significantly better, so we are going with veggie oil for the wedding. Melted butter didn't work well. It clumped up and definitely needed baking. As far as baked vs unbaked, there was really no significant difference, other than I thought the baked ones tasted slightly burned. I baked at 250 for 28 minutes. Even with only 1 T garlic, the garlic was overwhelming. I just mixed up a second batch using 16 oz pretzels, 1/2 cup veggie oil, 4 T ranch mix (if you are using the packages, I'd just go with one package) and 3 T dill. Skipped garlic altogether. Didn't bake. Much better. These keep well, prob. for 2 weeks. Tip: get good quality dill. The first I got from a bulk food store, and it tasted like dried grass. Then I got some from Frontier Herbs, from a bulk bin at a health food store. It was much darker green, and is delicious. I'm only giving this recipe 3 stars because of the huge garlic amount, and because it doesn't need baking. 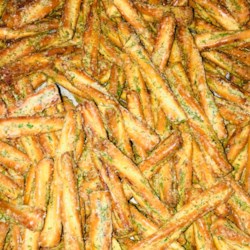