I didn't much care for this. I used a tortilla for the bread. The ceasar salad kits come with dressing and not powder so I had to add some of that. It was near impossible to drain the sun dried tomatoes as they are sitting in so much oil. The cream cheese got really oily due to the tomatoes and even small bit of dressing added. I ended up making one sandwich and adding turkey and extra cheese and then taking the cream cheese mixture and doctoring it up to make a dip. Something wasn't right about the recipe. As is, the cream cheese just tasted too much of sun dried tomatoes and had an odd after taste from the ceasar dressing. Maybe, the powder would have been different, but I have never seen it in a kit that way. I am giving it a 3, because I tried it as is and didn't care for it. However, I was able to salvage it so it wasn't a total flop. 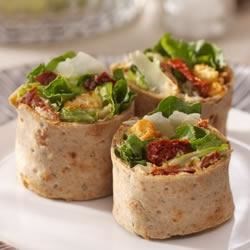