I only wish I had found this article before attempting this recipe: http://allrecipes.com/HowTo/How-to-Make-Rice-Pudding/Detail.aspx : I've always been one to gloss over negative reviews, considering how many others are very positive--thinking the former folks might have just gotten it wrong--but, not this time...the nays have it. There is something WRONG about this recipe. First, 7 is WAY too many eggs. Second, this rice "soup" requires at least a 3.5 qt dish. Third, a 300 degree oven will barely dry sliced bread, how can it cook a giant quiche (which is really what this is)? Fourth, 45 minutes is laughable. I had to leave it in there least an hour just to get enough thickness to stir it (so the spattering of rice wouldn't settle at the bottom). I threw it in for another 45 at 325 and it was still undercooked, separated, and inedible. Stove top seems the better way to go. 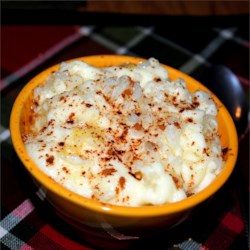