I was looking forward to trying this, but the cooking method is a little off in the recipe. I know that a 1" cubed potato will not fully cook in 12 minutes. At least not the ones I buy. I boiled the peeled cubed potatoes for 16 minutes before sauteing. I then cooked them about another 20 minutes before proceeding with the recipe. The onions also need additional time. I thought the beef would have been so much better sauteed until browned and then added to this. It makes the beef almost boiled cooking in the potatoes and onions. I wish I would have reworked that cooking step also. The sauce I used was Herdez red guajillo sauce. I had no problems with that except that it was a little too spicy hot after simmering. I think, this recipe could be better if re-worked some. I would also add peppers or other favorite flavorings to taste. It does make for a filling meal either way though. 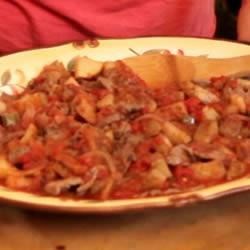