Very good simplet salad...I think I should have used small shrimp then what I bought. Didn't think about that until after I mixed with the other ingredients...salad shrimp probably would have been best. Do let the dressing meld with the shrimp mix because when tasting it in the beginning, rather salty. But does go away when chilled for several hours. Made this for my daughter and she reall liked it. But did ask that I make again with more tomatoes too. As well as smaller shrimp. 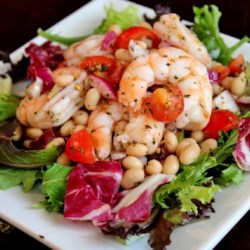