I made this vegan by subbing a creamy broccoli soup from the natural section in my grocery store that had a potato base instead of a dairy base. I used 1 1/4 cups of it as it wasn't condensed. Because of the reduced sodium in resulting dish, it proabably could've used some salt - but 2 out of 3 kids have it a thumbs up and went back for seconds! (The third kid has issues...) I also bought the seasoned bread crumbs instead of seasoning and crumbs. 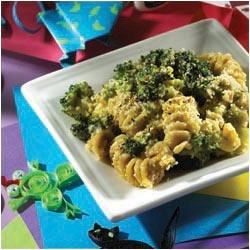