A-MA-ZING. So good. Cut the sugar in the filling to about 1 cup, which was plenty, and I used about 1/2 c. pecans because that's what I had, and it was great. I used brown sugar instead of white in the topping and cut it down just a bit, maybe by about a quarter, and since I had room in the pan I just went for it and put it all on even though reviewers said it was quite a bit even when cut down. But who doesn't love crumb topping, right?? It was lovely, I wouldn't do it any other way. The cinnamon, nutmeg, and pecans add such a nice, rich flavor to the rhubarb and strawberries. I am going to make this again VERY soon! 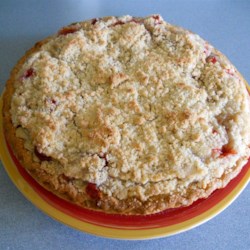