Font Size
Save Pin
Allrecipes
Pan Fried Brussels Sprouts
Rating: 4.11 stars
Don't be afraid of Brussels sprouts ... yes, they are green, but they are so delicious! Pan frying them brings out their flavor. Use as a side dish ... or if you're like me, an on-the-go breakfast item!
By Connie Fabian Byrnes
prep:
10 mins
cook:
20 mins
total:
30 mins
Servings:
4
Yield:
4 servings 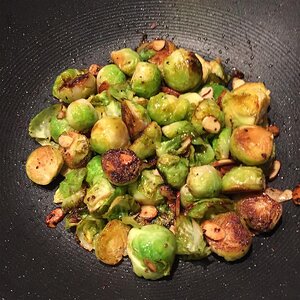 Pan Fried Brussels Sprouts
this link is to an external site that may or may not meet accessibility guidelines.