Okay so, I tried this despite most of the reviews either liking it or hating it. However, I did make a few changes, and it turned out well for me. I only used a couple pork chops since I was only cooking for myself and my husband (next time I will use more, as they were falling apart and it would have been nice to have more meat). I laid the pork chops (used pork tenderloins) in the bottom of my crock pot, layered sliced/peeled red potatoes and a sliced yellow onion on top of it. I repeated those layers and I did not use flour, I also only added pepper once I was done layering it. I also added some garlic salt instead of just regular salt to the top. I did not use a jar of cheese sauce because that sounded gross to both myself and my husband. Instead I took some suggestions from other reviewers and used a can of campbell's cheddar soup, and a can of campbell's cheddar broccoli soup. I mixed both of those up with milk, some all seasoning, and pepper and poured it in over the pork chops and layered potatoes/onion slices. I put it on high for 5 hours (which, I believe was far too much as my pork chops were falling apart), next time I will probably just try doing something around high for 4 hours, or low for 5 or 6. Overall, with changes made, I liked it and my husband loved it. It seemed weird at first having cheesy pork, but it was quite good. Served it with some warm rolls and broccoli, will probably make again. :) 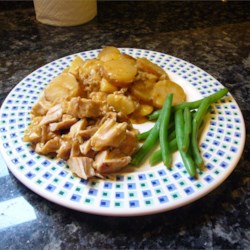