Recipe Group Selection: 24, May 2014 ~ I used this marinade on organic boneless chicken breast and it was delicious. I was worried that the honey would make this too sweet, but it wasn't. The chicken marinated for 2 days, so it had plenty of flavor. I also made veggie kabobs with zucchini and onion and had fresh asparagus that DH grilled. I did as Lindsay, the submitter suggested and saved part of the marinade to baste as we grilled and also used the marinade on the veggies. Remember to not use the marinade the meat soaked in, but to save some "clean" marinade to baste with and to use on veggies. A nice selection last week. 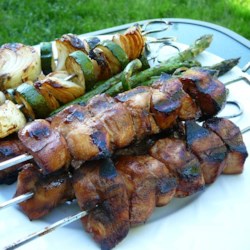