This is a very good banana bread! The first time I made it, it didn't turn out so well. The second time was much better. I beat the butter (real, usalted) and sugar a lot longer and used 3 large bananas. I use skim milk and dark brown sugar, since that's what I had on hand, and 1/4 tsp. regular salt instead of kosher. I found that it took about 60 minutes to bake, instead of 40. The bread still didn't rise that much, but at least it didn't sink in the middle like the last time! I made a topping of 3 Tbsp. brown sugar mixed with 1 tsp. cinnamon. The thing I like most about this bread is the "soft" texture, which must be attributed to the brown sugar. 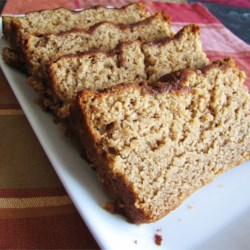