never would have imagined this would be good --so, basically followed the recipe, used brown rice though, and cooked it in veg broth and garlic, then added tuna, dried onion and tomatoes from my garden - maybe used a little more mozz than called for. also added a bit of johnnys doc - its a tacoma thing but lawrys is similar - seriously delicious. weird, granted, but delicious. 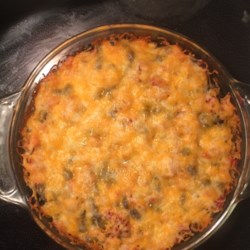