Well, the first time I made this recipe it didn’t turn out that well. I liked the idea of it so much though, that I decided to try again, with some tweaks. The first time I used ¾ cup rhubarb and 1 ½ cups water and reduced the water/sugar down to ¾ cup, like the recipe states. This ended up with way too much watered-down dressing! So the second time, I used ¾ cup rhubarb and ¾ cup water. I still cooked the rhubarb for 2 minutes and then removed and put it on the spinach, like the recipe states. It also doesn’t hurt to leave a few pieces of the rhubarb in the water. I simmered the water down to ¼ cup (about 10 minutes) – this made it more of a syrup with a more concentrated rhubarb flavor. I also reduced the vinegar and olive oil to better proportions. While the water/sugar simmered (without the vinegar), I combined 3 Tbsp. olive oil and 1 Tbsp. vinegar in a container with a lid. I then took the reduced rhubarb water and poured it in the container and shook vigorously, then poured it over the salad. Much better! As written, this is a 3-star recipe. With my changes, definitely 5-star! I will make this again! I’ve written up a custom version of this recipe so you can see my changes. **UPDATE: I made this again tonight and decided to serve it cold. I chilled the cooked rhubarb and dressing, then tossed it with the spinach and some blue cheese, bacon bits and walnuts. Yum! 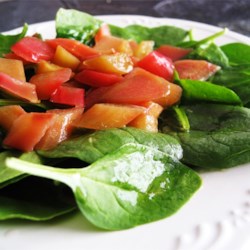