this bread hit some what the middle of the road for us. While I thought it was 3, my son gave it a 3. My oldest gave it a 4, while my middle daughter and my hubby gave it a 5. I'd never made this kind of bread. The recipe was very easy. It wasn't sweet, but was like a light biscuit bread. The raisins made it sweet. Can't say it was the best bread but can't say it was the worst either. But what I can say is that it was okay, but this batch needs to be divided into 2. The reason I say that is because It's so dense, that the bottom center never got completely baked even after it was in the oven an hour and 15 minutes. While it looked pretty, it was to thick. 2 smaller round loaves would have been better for the baking process. But I think in my own preference. To improve this better for my taste. Add just a hint of cinnamon to it. But it's an okay bread. 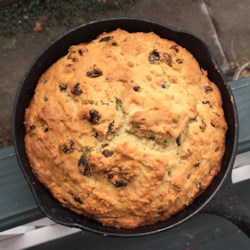