This recipe is very good, but I too had to change up the dough a bit. What I did was instead of 2 eggs and water, I used 1 large egg, 1/2 cup Sour Cream, and 1/4 cup soften butter. Much easier for me to work with. Plus I just dropped them in boiling water until the pasta was done. Also, you can freeze them too. Put them on a sheet in a single layer and put them in the freezer, when the outsides are frozen... into a ziplock they go! Then when you want to use them, take out what you need and drop them in boiling water until they float. You can freeze the sauce in a ziplock too! Busy day? Homemade dinner is done! 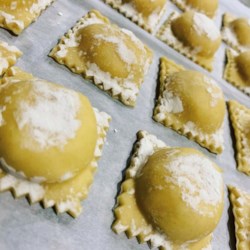