this is AMAZING!!! i don't seem to be able to stop eating this...! the only thing is that the artichoke doesn't quite fit in here... i love artichoke, but it taste weird in this soup. i'll leave it out next time. i added a couple red potatoes (sautéed with the rest of the veggies) and corn kernel (frozen. added when i added the veggies to the liquid). i think both fit really well with this soup. used veggie broth instead of chicken, fresh sage instead of dry, fat free 1/2 & 1/2 instead of heavy cream. worked out fine. i also used more oysters than called for since i love oysters. my tip is don't put all the oysters in the soup if you know you're not gonna finish the whole pot. add as many as you think you'll eat in one setting, save the rest and add them (again, only as many as you can eat at once) when you reheat the soup, so that you won't end up having gross chewy oysters that's been reheated 3 times. 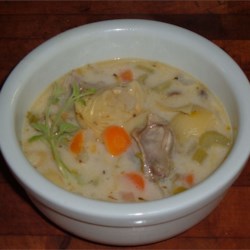