This was really good. I used diced tomatoes and 1/2 can (about 7 ounces) of tomato sauce instead of the tomatoes (no pureeing) and used 1/2 Half and Half and 1/2 evaporated skim milk instead of the cream to bring down the calories. I also added some potatoes in with the tomatoes because I didn't have that much paneer on hand, and it was delicious and a bit heartier. I found it slightly bland, so I added about 1/2 tablespoon of Garam Masala to kick it up, which immediately did the trick. Really good recipe. 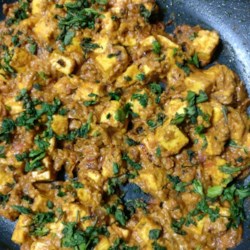