This recipe was ok, but I found that the cooking time once the lid was removed needed to be longer. I made one batch leaving the lid off for the suggested one hour and the butter was more like apple sauce. I found some suggestions from an extension service. They said To test for doneness, remove a spoonful and hold it away from steam for 2 minutes. It is done if the butter remains mounded on the spoon. Another way to determine when the butter is cooked adequately is to spoon a small quantity onto a plate. When a rim of liquid does not separate around the edge of the butter, it is ready for canning. Also in my first batch I reduced the amount of sugar as some suggested. I think this was a mistake too. The second batch was much better using the entire 4 cups. 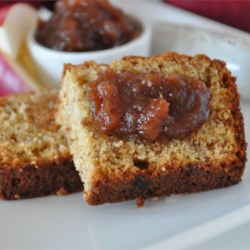