Great flavor, not so hot in the looks department--this was mostly my fault, just letting others know what not to do! I didn't have tomato puree, just petite diced; I was going to puree it myself in the food processor, but decided since the onions were in big chunks and I like chunky tomato soup, I would try it as is. So I dumped in the big can of diced tomatoes, and then noticed that the milk was a little curdled. I followed the recipe exactly, so this was a little disappointing. After adding the spinach and basil with the curdled milk it looked really nasty, and I got the bright idea to throw it all in the blender. It came out looking like baby poo :) I had friends over, and they all said the flavor was great, I just don't recommend blending the soup all together. Next time I will just deal with the milk chunks :) Wonderful flavor so thanks for the recipe, I'm going to keep trying on this one! Update: Made again, per recipe except I added the milk last. Still had tiny milk chunks but not bad. Still tasty :) 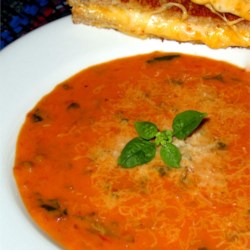