I made this today using ten very large apples, cores removed, and following the rest of the proportions. I reduced the heat on the boil - just barely kept it boiling but not boiling too hard - and did the full hour. I really didn't lose that much liquid. My cider wasn't too sweet at all, but we felt it needed a pinch of salt and more spices, so I added those at the end. After straining, I got 2.5 liters of cider, so definitely not a full gallon. I followed the advice of a previous reviewer and used the pulpy apples that were left to make the best darn apple butter I've ever had: added 2/3 cup brown sugar, 2/3 cup white sugar, a tsp of salt, ground cloves, nutmeg and more cinnamon and cooked with a lid for three hours and without a lid for another hour and a half. I used an immersion blender to blend in the apple skins and got four cups yield. YUM all around - happy with the cider and the apple butter, too! 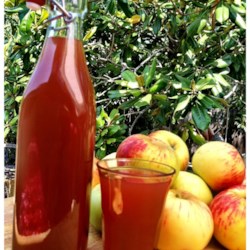