This was delicious, but mainly because I made the modifications made by other reviewers. I did 6 eggs and 1 c. milk and 1 c. half and half. I also added a lot more cinnamon, just my personal pref. In order to get my bread just right, I sliced it and then put it in the oven at 200 to dry it out a bit, flipping once while in there. I think that helped a lot, as would slicing it and letting it get stale on its own. I then cut each thick slice of French bread into 4 pieces. In the morning, I flipped all the pieces about 2-3 hours before it went into the oven. There were a few pieces of bread that were dry (maybe b/c I used a little more bread than called for by accident), so I did up a little more of the egg and cream mixture and just drenched the dry ones. I put it in the oven covered for about 25 minutes and then removed the foil and poured the caramel mixture over (used maple syrup instead of corn syrup which gave it great flavor). This was for a brunch for about 15 ladies and it was a hit! Many requested the recipe. I found the texture was perfect, crispy on top, but not hard. Yet still moist. The flavor was great, not too sweet as others had said. I really labored over all the previous reviews because so many had issues w/ it being soggy, but I will for sure make this again with the changes. (I did double this recipe and serve in a chafing dish, and it held up really well to being kept warm for about 2-3 hours. And it smelled delicious all the while). 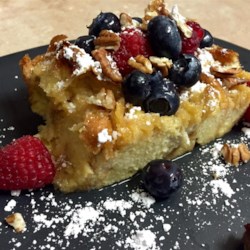