YUMMY!!! I followed the other suggestions and put the hash browns in first instead of mixing it. I added a couple of shakes of salt and pepper on top of the hash browns and I baked them in the oven for about 10 minutes before pouring the egg mixture over the top. I didn't put quite the amount of milk this recipe called for. I only put 1 cup in, if that. 2 cups just sounded too much, and would be very runny. I also added a few shakes of salt and pepper to the egg mixture because of some comments that the dish was a little bland. This was smelled great while cooking and tasted just as wonderful! Delicious!! Thank you Stephanie! This is definatley a keeper! 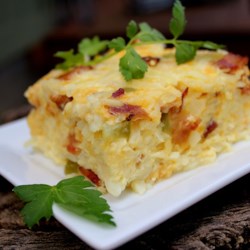